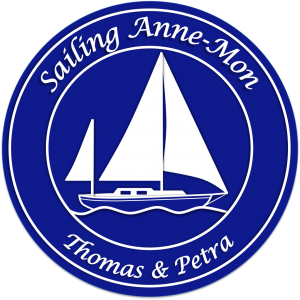 … and welcome to our sailing blog!

We left Stockholm August 2020 and sailed to the Caribbean and back again. On this blog we have shared everything from preparations and renovations before departure to our experiences when being out sailing. On the blog we also share what information and costs you need to know if planning a sailing trip.

During the last weeks we haven’t had very good weather here in Stockholm, very cold and rainy so we haven’t been able to make as much progress as we would have liked with the paint job. But, during the rainy days we have been able to get started with all other final jobs we want to do before departure, such as starting with autopilot installation, replacing our old manual windlass with an electrical one and finishing our electrical panel, so at least we haven’t been out of work 😉

Whenever there has been a weather window we have been adding putty and sanded on the topsides until it felt pretty ok. We have used epoxy together with a fairing filler which is easy to sand, but it takes a long time to harden.

We have also removed and replaced all our through-hulls and during the rainy days we managed to finish that.

We also tried out our new laser we bought to mark the waterline and make it straight. We weren’t very satisfied with the old waterline as it wasn’t very straight. Hopefully it will be better by using the laser but it is not easy knowing how the actual waterline will be.

We have also bought a fishing reel. We managed to find a second hand Penn Senator 12/0, and it is HUGE. Which we realized when we got it. We also realized that it could be that model they use in the movie Jaws, or maybe they use a bigger one in the movie. As it is so big we plan to have it rail-mounted instead of on a rod. It also feels like a good idea since our cockpit is pretty small anyway and both the mizzen mast and windvane is blocking the way to be able to use the rod fully.

We have also made some progress with finding an insurance for both us and the boat. As we mentioned in this post we have had issues finding third party insurance only for our trip as our boat is pretty cheap and old. But now we have almost signed and paid for an insurance. We also managed to get a travel insurance for ourselves, via our home insurance. Will write more about the insurance and paperwork in general soon.

Just some dolphin love for you this Saturday 🐬

What we did this time around last year, playing ar

Dominica memories 🐒🌴🇩🇲😃 Such a cool

Our Atlantic Crossing ⛵️ from Caribbean to the

Some more footage from this ridiculous calm day we

Our Atlantic Crossing ⛵️from the Caribbean to

Thinking back on it, it feels kind of surreal that

Thinking back on our one year of sailing this is f

Airplanes and preparations for the upcoming Atlant

Some snapshots from our stop at La Graciosa about

Easy to dream back to Caribbean when we have Novem

New video is up from when we visited Barbuda 🏖

This time last year we had just started our sailin

After 12000 nautical miles sailed back and forth t

Some photos from our sail along the Swedish coast

First stop back in Sweden was Arild at Kullaberg c